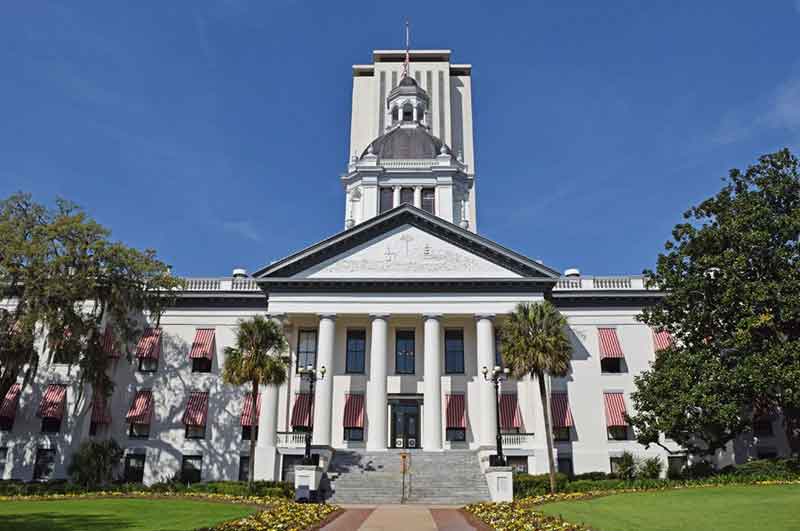 Community association operations rely upon the timely and full payment of all assessments by all of the owners.  One of the mechanisms that Florida law provides to put associations in a stronger position when an owner becomes delinquent is the “secured interest” of the association in the unpaid assessments by way of its ongoing lien against the unit or lot for the unpaid assessments.  This secured interest puts the claim of the association at a higher priority than most other claims, other than a first mortgage or unpaid property taxes.  However, a recent decision in the United States Bankruptcy Court for the Southern District of Florida, In re: Adam, Case No.: 22-10140-MAM, September 23, 2022, has cast a potential cloud on that secured interest.

In the In re Adam case, the Association previously obtained a judgment of foreclosure for over $76,000, which was considered as a secured interest by the Court.  The Association was also claiming an additional $36,558 which came due after the judgment was entered.  The owners were asking the Court to decide that the $36,000 was not secured and therefore uncollectible in the bankruptcy (or at least not fully collectible).

In deciding whether certain association claims were secured and collectible in the bankruptcy setting, the Court undertook an analysis of Florida law on the subject.  The Court noted that both the Florida Condominium Act (Chapter 718 F.S.) and the Homeowner’s Association Act (Chapter 720 F.S.) currently contain express provisions that identify that the lien of the association is effective from the original recording of the declaration (with the added requirement in HOA’s that the declaration specifically expresses this lien right).  However, the Court also points out that the Condominium Act was amended in 1992 to provide for this effective date.  (The Homeowner’s Association Act was amended to provide for it in 2008.)  Prior to these amendments, these Statutes provided for the effective date of the lien to be when it was recorded in the public records of the county.  The analysis of the Court required it to consider whether the current version of the Statute applies to the situation or whether an earlier version of the Statute is the controlling authority.  (This case involved a condominium so only the Condominium Act was considered in the decision.)

To make that determination, the Court applied the principles of the seminal case of Kaufman v. Shere, 347 So.2d 627 (Fla. 3d DCA 1977), which require declarations to contain the specific phrase “as amended from time to time” when identifying the Statute that governs the documents in order for the current version of the Statute to apply.  This is because Statutes are not retroactive in their application unless the legislature expressly makes them so in the Statute itself.  Both the U.S. and Florida Constitutions do not allow for the State to make a law that infringes upon the vested rights in an existing contract (which would be the declaration).  As a result, the contract (declaration) would need to have the specific “as amended from time to time” language (often called “Kaufman” language) to automatically incorporate changes to the Statute that is not otherwise retroactive.

When the Court reviewed the governing documents, it noted that they were from 1987 and did not have the Kaufman language.  As such, the Court held that the provisions of the declaration were the same as the Statute in 1987, which provided that the lien was effective only upon being recorded in the public records of the county.  Since the Association did not file another lien for the amount being claimed subsequent to the foreclosure judgment, the Court concluded that this portion was not secured.  In the bankruptcy setting, this meant that the Association would likely be unable to recover most, if not all of this claim from the Debtors, Mr. and Ms. Adam.

While this issue may be most relevant to associations when dealing with a case in bankruptcy, it is possible that it could also be raised in state court foreclosure cases under certain circumstances.  It is also important to note that this Bankruptcy Court did not include a significant issue in the analysis regarding the Statute at issue, that being whether or not the statutory provision was “substantive” or “procedural”, as those terms apply to this situation, which could have led to a different result.  (This portion of the legal analysis is quite technical and beyond the scope of this article.)

For communities whose declarations were recorded prior to the statutory changes described above, the first step in protecting the interests of the association is to review the documents to determine whether Kaufman language is already in them.  If not, the board may wish to consider proposing an amendment to the owners to change the documents to include this language, if not for the entire declaration, then at least for the timing of the effectiveness of the lien of the association.  Having qualified legal counsel review these issues in the documents is a strong business practice. 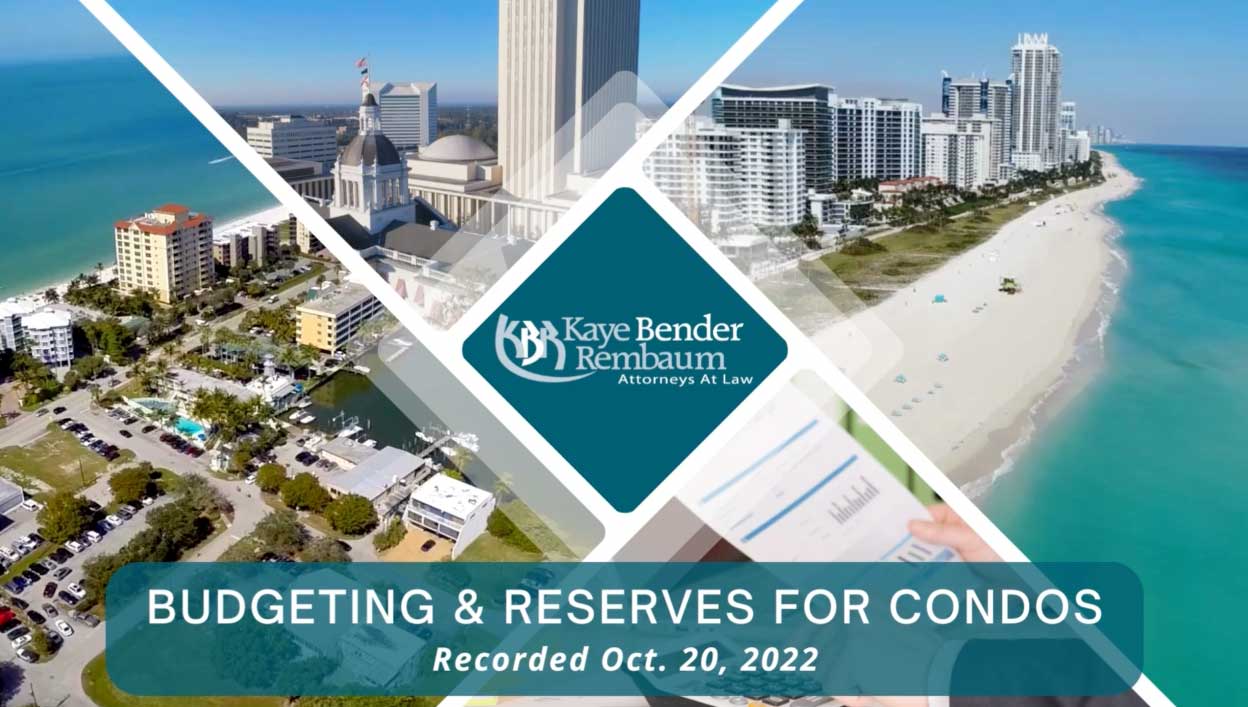 Attorney Allison Hertz, from our Palm Beach Gardens location, will cover several topics that will help with your condominium association’s budget planning. In addition to operational aspects, Ms. Hertz will also discuss reserves and how insurance trends and the new building safety legislation will affect your association budgeting. Recorded October 20, 2022.

Note: Viewing this class will not satisfy any Florida State requirement for CAMs or Board Members.

Castle Group invites you to join us for Season 4, Episode 1 of Association Leadership. This recording is: Reserves Today and Tomorrow – Condo & HOA and a continued discussion on SB-4D. 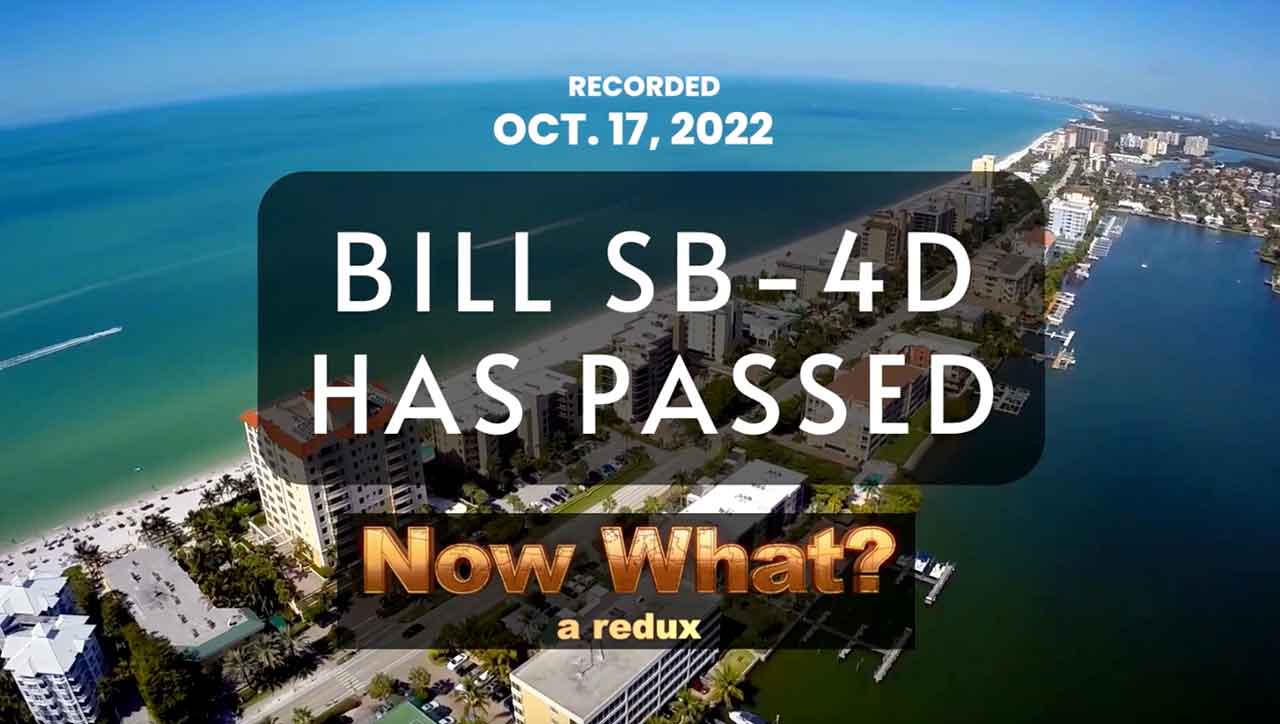 Jeffrey Rembaum, Esq., BCS of Kaye Bender Rembaum provides a substantive overview of Bill SB-4D. He is joined by industry professionals, all listed below: 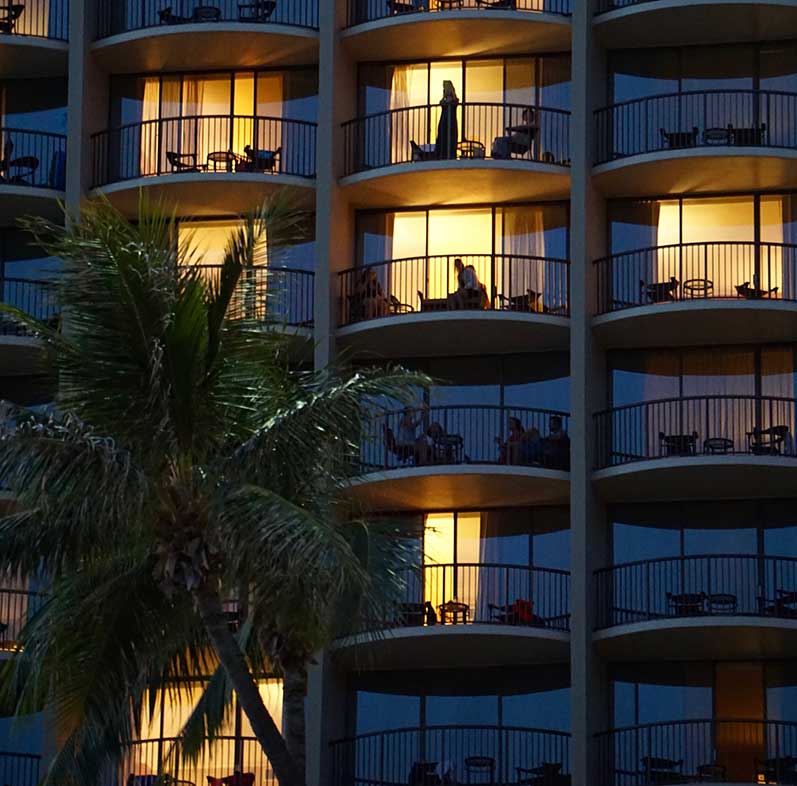 Do you think you do not need condominium insurance because your condominium association has it? You would be so very wrong if you do! It has happened more times than I can count—the supply line that feeds the toilet ruptures in the upstairs unit while the owner of the unit is out of town, the upstairs unit owner forgot that he or she started to fill the tub and it overflows, or the upstairs unit owner ignores a broken toilet, all of which result in water flowing down into the unit below. Next thing you know, the remediation workers arrive and start ripping out the soaked, damaged drywall in the units below and after cutting holes in the drywall use their industrial-sized blowers to dry things out to prevent mold. 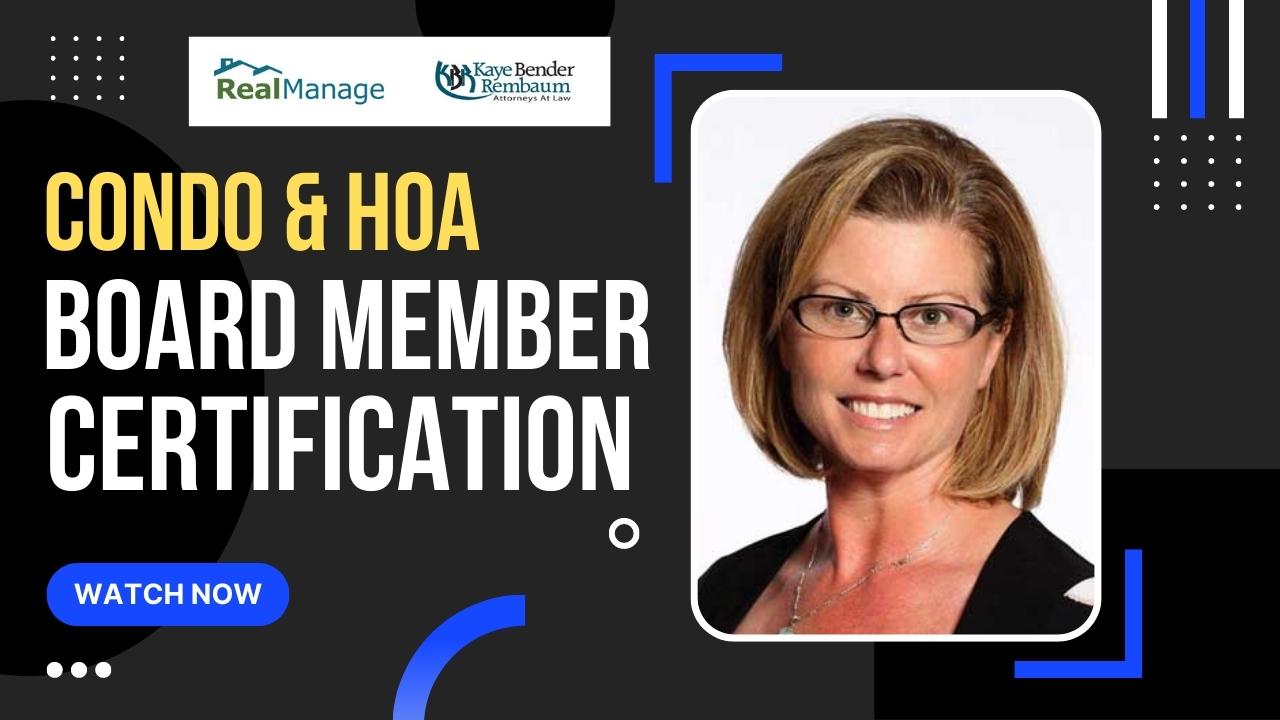 Hosted by RealManage and course provided by Kaye Bender Rembaum, featuring Lisa A. Magill, Esq., BCS. Jonathan Louis of RealManage moderator. This is for informational purposes only. Viewing this on-demand will not provide certification, and this video does not constitute legal advice. 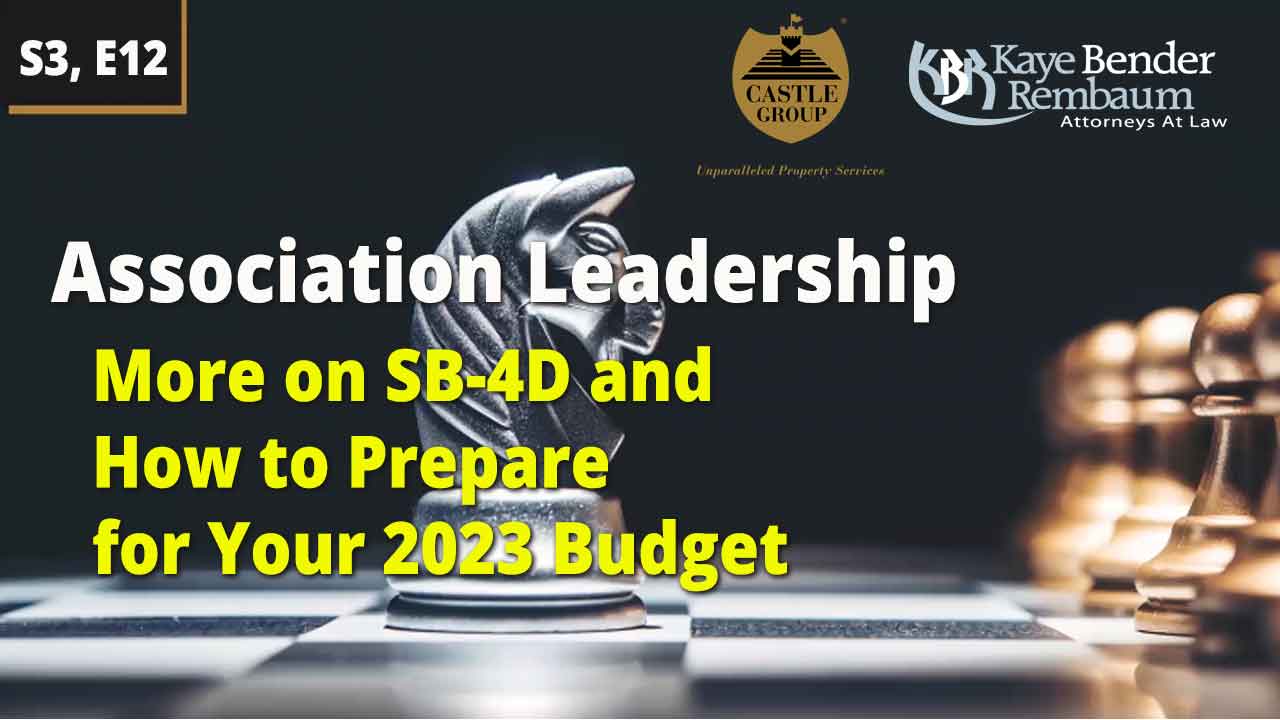 Castle Group invites you to join us for Season 3, Episode 12 of Association Leadership. Join our continued discussion on SB-4D and more on how to prepare for your 2023 budget. The live webinar will be hosted by Craig Vaughan, Castle Group – Founder & CFO who will be joined by Attorneys Michael S. Bender and Jeffrey A. Rembaum – Kaye Bender Rembaum, P.L., Board Certified Specialists in Condominium and Planned Development Law, and special guest Steven Gladstone, Gladstone & Company, CPAs, Owner. 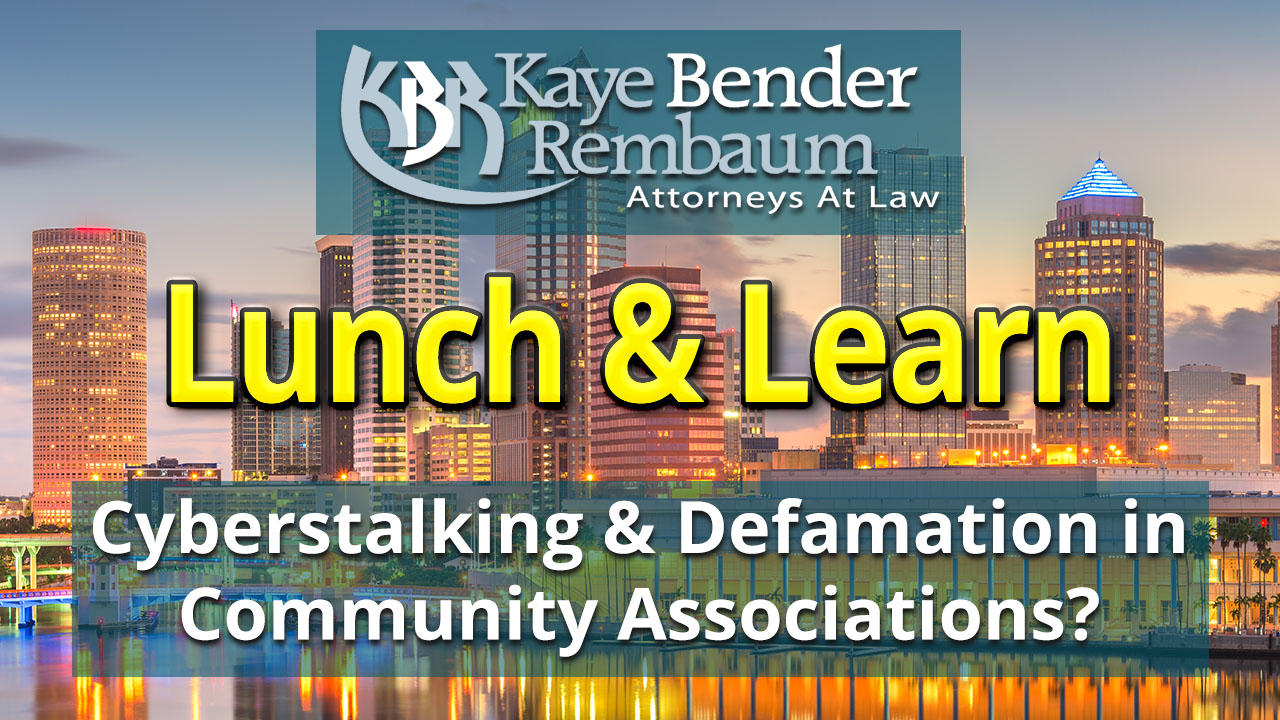 The theme for this Lunch & Learn is Association Operations. Topics to include Cyberstalking & Defamation in Community Associations. Features Shawn G. Brown, Esq., BCS from our Tampa, Florida office.

Thank you for joining Evan Bradley from Campbell Property Management, Attorney Michael Bender from Kaye Bender Rembaum, and Engineer Scott Harvey-Lewis from Building Mavens for this “New Condo Inspection Bill Webinar Part Two”. This recording is from August 4, 2022 and was hosted on Zoom. Learn how this impacts your community association.

Disclaimer: This video is for educational purposes only. You will not receive CEU credits for watching the recording. If applicable, credits were issued only to those that attended the course live. 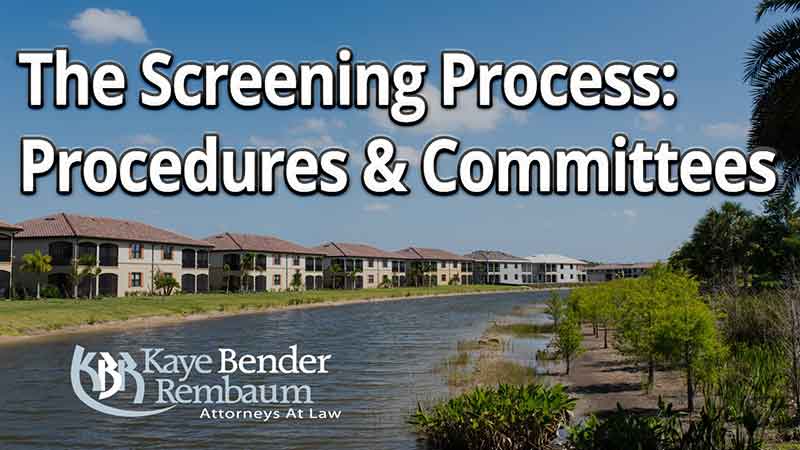 This webinar is for educational purposes and is not to be considered as legal advice. Watching this video does not satisfy any state or local requirements.

Associations often fail to have clearly defined procedures for handling transfer (sale/lease) approvals, leading to liability exposure, not only for the corporation, but also for individual board members and Community Association Managers (CAMs). Participants in this course will learn how to create and adopt transfer approval procedures, what should be included on the transfer approval application, how to comply with local government ordinances, how to comply with Fair Credit Reporting Act requirements and how to train screening committee members, board members and staff to conduct the transfer approval process and interview.